Welcome to the Swamp!

It's the dawn of a new alligator season in Louisiana!

The stories and adventures of alligator hunters in Louisiana are being told in the TV series "Swamp People" on the History Channel.

How Many Swamp People Episodes?

After a successful debut in August, 2010, Swamp People has become a popular hit series on the History Channel, with 227 episodes produced in 13 seasons through 2022.

South Louisiana is a delicate, complex combination of swamps, wetlands, bayous, marshes, estuaries, and river delta area where the Atchafalaya River and the Gulf of Mexico converge.

It is often called "America's Wetland", and is navigated by the alligator hunters in a variety of motor boats, airboats, and piroques.

See map below on this page for more details of Swamp People filming locations.

Celebrities and Cast of Characters on Swamp People

The cast of Swamp People changes from season to season, as new members are added, and others removed.

Many familiar faces were seen in Season 13 in 2022, along with some new ones. Of course the Landrys are there ... Troy, Jacob and Chase. Others seen in this season included Anthony "Porkchop" Williams, Wille Edwards, Pickle Wheat, Bruce Mitchell, Leron Jones, Daniel and Dwaine Edgar, Junior Edwards, Liz Choate, R.J and Jay Paul Molinere, along with others!

Troy Landry has spent the last three decades earning his reputation as king of the swamp men. "Choot 'em" is a phrase heard often on Swamp People as Troy finishes off another prey and tags another giant gator.

Troy works out of his home town of Pierre Part, a small community deep in the swamp close to the cities of Donaldsonville and Thibodaux, and Lake Verret. He always wears his "lucky shirt", a blue Ralph Lauren striped polo shirt!

Troy's son Jacob Landry is now a gator boat veteran. In Season 3, Jacob took on new responsibilities as captain of Troy’s second boat. In Season 5, Jacob was helped by a family friend, Marie LaCote. Chase Landry is Troy Landry’s youngest son, and in Season 4 he teamed up with his father.

After Troy Landry hired her as his helper in Season 2, Elizabeth Cavalier quickly proved her gator hunting abilities, and earned the nickname “Lucky Liz”, and "Gator Queen".

A native of Pierre Part and now a resident of Pecan Island, Liz grew up in the marsh south of Houma, and has been around alligators all her life.

In Season 5, Liz's daughter Jessica helped in the boat. Their goal was to use all of the 425 gator tags that have been alloted to them. Liz also launched a second boat, with her husband Justin as captain, and long-time swamper Glenn Guist as helper.

Liz's friend Kristi Broussard was born in Forked Island, Louisiana, a small community located near Intracoastal City, between Abbeville and Pecan Island. Kristi is a true Cajun, and former Navy veteran, who owns a ranch in South Louisiana where she breaks horses.

A Native American hunter from the Houma area, R.J. Molinere made a name for himself in Season 2 by catching some of the season’s biggest gators amongst his 200 gator tags. A two-time world champion arm wrestler, R.J., working with his son Jay Paul Molinere, an expert sharpshooter, had another big trapping year in Season 4.

For the past few years, R.J. and Jay Paul had not been able to hunt near their home. In Season 4, they were able to get their local tags back and R.J. was back on his own familiar turf.

In Season 5, R.J. and Jay Paul tackled an area known as Bayou Creole that has not been hunted for years, and is teaming with giant alligators.

A lifelong swamper, Bruce Mitchell is a bit of a renegade, but an experienced gator hunter. He hunts in the swamps around his home in the Hammond, Louisiana area near Ponchatoula.

Although Bruce has always hunted alligators alone, beginning in Season 3 he was accompanied by Ron Methvin, a trained sharpshooter and military veteran who served in Afghanistan.

Troy Broussard and Harlan Hatcher hunt in the swamps around Beaumont, Texas, just across the border from Louisiana. Since the hunting season in Texas begins 10 days later than it does in Louisiana, the duo spends the extra days in Louisiana as a "warm-up" for Texas. They made a deal with a Louisiana landowner that provided them with the tags they need.

David LaDart is Jeromy Pruitt's stepfather and taught Jeromy how to hunt gators. The guys have been known to wrestle and lasso some of the biggest gators in Louisiana.

In Season 4 they concentrated on catching gators in North Louisiana, and in Season 5 they headed for South Louisiana in their RV, hoping to fill the 150 gator tags they have.

Terral Evans is a long-time nuisance hunter around Honey Island, in Eastern Louisiana near the Pearl River and Mississippi.

In Season 5, he teamed up with Johnny Panks to rid the area of some huge nuisance gators.

Native American Roger Rivers knows how to catch anything, including wild hogs, 100-pound turtles, 75-pound catfish, and alligators. He caught gators in different areas of Louisiana in Season 5.

Roger, an Apache Indian, lives with his wife and family in Zwolle, in northwest Louisiana, between the cities of Many and Mansfield. In September of 2011, he wrestled and captured a 12 foot, 7 inch, 1,100-pound gator to fill one of the only two tags he was allowed for Toledo Bend Reservoir. Toledo Bend is a massive body of water straddling the border between Louisiana and Texas.

Other cast characters that have appeared on Swamp People:

One of the most popular things to do in Louisiana is touring the swamps! Most tours are concentrated in South Louisiana.

The lush growth in a Louisiana swamp is indescribable. You have to see it to believe it.

The most impressive objects in the swamp are the cypress trees which are very graceful in their structure, with their reddish bark, exquisitely bent branches, and delicately fine leaves.

The area between Lafayette and Baton Rouge offers a number of swamp tours, operating from communities such as Breaux Bridge, Henderson, St. Martinvile and Plaquemine.

Learn more about Swamp Tours in the Atchafalaya Basin. 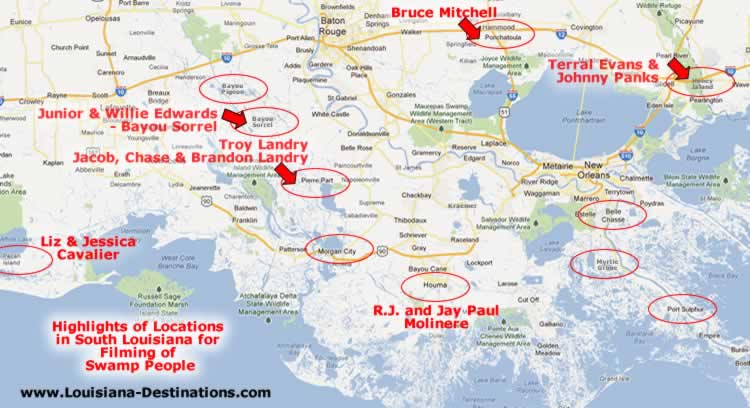 The American Alligator: the Subject of the Hunt on Swamp People

Alligators have been harvested in the Louisiana swamps for over 200 years. These huge, dangerous reptiles are harvested for their skins which are used to make boots, shoes, belts, and saddles, and in years past their oil was used to grease steam engines and cotton mills. Their meat is also considered a delicacy.

The Louisiana Department of Wildlife & Fisheries (LDWF) allocates a set number of alligator tags each season to licensed alligator hunters. To obtain a license, the alligator hunter submits an application form including a legal description and map of the property to be hunted, and a landowner’s permission for the hunter to harvest alligators on the property. Once the season begins, and as hunting occurs, a tag is attached to the tail of the alligator after the reptile is landed.

Since the inception of LDWF’s wild harvest program in 1972, over 1,000,000 wild alligators have been harvested and sold bringing in millions of dollars of revenue to landowners and trappers. Conservative estimates have valued these resources at over $320,000,000, providing significant, direct economic benefit to Louisiana.

The Swamp People TV series debuted in August, 2010, and has become a popular hit series on the History Channel, with a total of 227 episodes produced through 2022 in its first 13 seasons. Season 14 is scheduled to premiere on January 5, 2023.

These are some of our favorite episodes from early seasons ... Seasons 1, 2 and 3: Big Head Bites It, Rising Pressure, Gator Gauntlet, House Divided, Dark Waters, Force of Nature, King of the Swamp, and Divide to Conquer. We also liked Something Wicked This Way Comes, Gator Voodoo, Troy's Gamble, and so many more!

Visit the History Channel for details on Swamp People episodes

More Scenes In and Around the Louisiana Swamps

Louisiana is a popular setting for the movie industry, and several hit TV shows on the History Channel, Cooking Channel, Discovery Channel, A&E, CMT, and other cable networks. Besides Swamp People, several other TV shows have been popular, such as Duck Dynasty, Cajun Pawn Stars, Cajun Aces, Big Easy Motors and others.

The state has become an exciting location featuring a diversity of towns and subjects for reality television for three main reasons: 1) tax credits and incentives, 2) mild year-round weather, and 3) interesting, likable, real-world characters.

Links of Interest about Louisiana and Alligators