Pierre Part is a community of about 3,500 residents in Assumption Parish in south central Louisiana, with the largest nearby cities being Baton Rouge, Morgan City, and Thibodaux.

Located in a sparesly populated area along the eastern edge of the Atchafalaya Basin, it shares this beautiful land with other small nearby communities such as Bayou Sorrel and Bayou Pigeon.

It is situated on land only 3 feet above mean sea level and is surrounded by water, and was thus isolated from much of the world and was not accessible by land, until the mid-20th century.

Pierre Part is a quaint, quiet small town, nestled in the beautiful swamps and bayous of South Louisiana. The town is clean, and the homes are lovely, and the people are friendly ... a highly recommended place to visit.

Our most recent trip to Pierre Part was on a perfect blue-sky day when many of the photos on this page were taken.

A wide range of local businesses serve the area, including the Pierre Part Store, in operation since 1911, the Rainbow Inn, Duffy's Shell Station, many fresh seafood outlets & restaurants, realtors, banks, attorneys, the Bayou Journal Newspaper, and many more.

Louisiana Highway 70 runs through Pierre Part, and the town can be reached from Morgan City from the south and Paincourtville from the east, as well as Donaldsonville and White Castle. The local Zip Code for Pierre Part is 70339.

The Atchafalaya River meanders from near Simmesport southward past Pierre Part down to Morgan City and the Gulf of Mexico. The Atchafalaya Basin is a unique combination of wetlands, bayous, marshes, estuaries,and river delta area.

It is often called "America's Wetland", and covers an area 20 miles wide and 150 miles long.

Swamp People and Pierre Part on the History Channel

Swamp People debuted in August of 2010, and has become a runaway hit ever since.

TThe History Channel has announced it is set to premier Season 12 of Swamp People on Thursday, February 4, 2021, at 9/8C.

Several of the hunters have become celebrities, including Troy Landry and his sons Jacob and Chase of Pierre Part. "Choot 'em" has become a famous phrase voiced by Troy on Swamp People. Other popular characters include, Elizabeth Cavalier, Bruce Mitchell, and others.

Besides Alligators, Another Delicacy from the Louisiana Swamps: Crawfish! 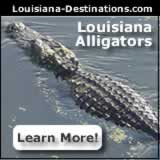 Alligator season is only 30 days. The rest of the year the fishermen in Pierre Part catch other delicacies from the local waters, including catfish, turtles, and crawfish.

In some part of the country folks might call 'em crayfish, crawdads, or mudbugs, but here in Louisiana they are simply CRAWFISH!

Nearly all of the live crawfish sold in the U.S. come from Louisiana, and begin life in the wild waters of the state, or on a farm. The harvesting of crawfish from natural habitats such as bayous, swamps and marshes provides a significant number of jobs for Louisiana residents.

Crawfish season varies from one year to the next, based on how cold (or mild) the weather was during the Louisiana winter. It also depends on the amount of rain, and the water levels in the swamps and bayous. Generally, the crawfish season in Louisiana runs from January through July for crawfish caught in the wild. Crawfish from farms is available over a longer period of the year.

Louisiana is known for its Cajun and Creole culture, and its legendary Cajun cooking and crawfish. Excellent Cajun cooking abounds in all parts of Louisiana, whether your tastes tend to seafood gumbo, Boudin, Andouille sausage, or maybe even fried alligator!

Crawfish is a key ingredient in many Louisiana dishes and meals ... some of our favorites are Crawfish Etouffee, Crawfish Bisque, Crawfish Pie, Fried Crawfish, Crawfish Jambalaya, and of course boiled crawfish.

Swamp Tours in the Atchafalaya Basin Near Pierre Part

One of the most popular things to do in Louisiana is touring the swamps! Most tours are concentrated in South Louisiana.

The area between Lafayette and Baton Rouge offers a number of swamp tours, operating from communities such as Breaux Bridge, Henderson, St. Martinvile and Plaquemine.

Learn more about Swamp Tours in the Atchafalaya Basin.

Our Connections to South Louisiana

Our ancestors are all Cajun, and our family roots are from the Bayou Lafourche area and nearby towns of Paincourtville, Napoleonville, Plattenville, and Labadieville.

We are Boudreaux, Fremin, Gautreaux, Thibodeaux, Prejean, and Bourg. My grandfather worked in the sugar cane fields along the bayou and my father in the sawmills in White Castle.