Geography of Louisiana and Its Impact on Weather

The surface of Louisiana can be divided into two parts, the uplands of the north, and the alluvial areas along the coast. The alluvial region includes low swamp lands, coastal marshlands and beaches, and barrier islands.

The higher and contiguous hill lands of the north part of the state have an area of more than 25,000 square miles. They consist of prairie and woodlands.

Elevations in the state range from sea level at the Gulf of Mexico, to 535 feet above sea level at Driskell Mountain near Ruston.

Louisiana has a humid subtropical climate, with long, hot, humid summers and short, mild winters. Precipitation is frequent throughout the year, although the summer is slightly wetter than the rest of the year. Rainfall and humidity decrease, and daily temperature variations increase with distance from the Gulf of Mexico.

In the summer, the extreme maximum temperature is much warmer in the north than in the south, with temperatures near the Gulf of Mexico occasionally reaching 100 °F, although temperatures above 95 °F are commonplace. In northern Louisiana, the temperatures often reach above 105 °F in the summer.

Louisiana is often affected by tropical cyclones and is very vulnerable to strikes by major hurricanes. The entire state averages over 60 days of thunderstorms a year, more than any other state except Florida. Louisiana averages 27 tornadoes annually.

The highest temperature on record was 114 degrees, measured on August 10, 1936 in Plain Dealing, in extreme northwest Louisiana near Shreveport. The lowest temperature was -16 degrees, recorded on February 13, 1899 in Minden.

Current Louisiana Weather Conditions, Weather Radar, and Forecast as Reported in the Center of the State at Alexandria (courtesy of Accuweather)

Past Tropical Hurricane Impacts in Louisiana

Louisiana cities and towns along the Gulf coast, and those further inland, have been impacted by major hurricanes for decades, and centuries. Major tropical storms have caused catastrophic damage, from Slidell and New Orleans, to Grand Isle, Pine Island, Cameron and other towns in between.

Growing up, and living in Louisiana, we clearly remember the names, like Audrey, Andrew, Katrina, Rita, Gustav, Betsy and many more. Some of the storms and experiences are still in our minds ...

The deadliest natural disaster in the history of Southwest Louisiana struck the coast during the early morning hours of June 27, 1957. An early season hurricane named Audrey roared ashore into Southwest Louisiana and Southeastern Texas. It was the only storm to reach Hurricane Category 4 status in June.

The eye of Audrey made landfall south of Sabine Lake, crosssed the lake and then passed over Bridge City, Texas. Audrey spread a massive storm surge across most of Cameron parish, and across the southern halves of Vermilion, Iberia, and St. Mary parishes, causing total devastation in property and many lives lost.

Damage in Louisiana was catastrophic, with 60-80% of the homes and businesses from Cameron to Grand Chenier being either destroyed or severely damaged.

Hurricane Audrey ranks as the 7th deadliest hurricane to strike the United States in modern times, with at least 500 deaths. The exact number will never be known, as many perished in the storm surge in Cameron and Vermilion parishes, and many missing persons were never found.

Hurricane Betsy's most severe impacts were felt in Louisiana, where it made landfall as a powerful Category 4 hurricane in 1965.

Betsy slammed into New Orleans on the evening of September 9, 1965, where 110 mph winds and power failures were reported. The cyclone pushed damaging storm surge into Lake Pontchartrain, breaching levees in New Orleans and inundating several neighborhoods, most notably the lower Ninth Ward. Strong winds caused widespread power and telecommunications outages across the region.

Further inland, effects wrought by Betsy were considerably weaker, although there was heavy rainfall in Louisiana as far north as Ruston.

Hurricane Andrew was a powerful and destructive Category 5 Atlantic hurricane that struck the Bahamas, Florida, and Louisiana in August of 1992.

Prior to making landfall in Louisiana on August 26, Andrew caused extensive damage to oil platforms in the Gulf of Mexico, leading to $500 million in losses for oil companies. It produced hurricane-force winds along its path through Louisiana, damaging large stretches of power lines that left about 230,000 people without electricity.

Over 80% of trees in the Atchafalaya River basin were downed, and the agriculture in the region was devastated. Even Baton Rouge, miles inland from the Gulf, suffered significant tree and power line damage.

Hurricane Katrina was a Category 5 tropical cyclone that occurred in August of 2005, causing over 1,200 deaths and $125 billion in damage, particularly in the city of New Orleans and the surrounding areas.

After attaining Category 5 status on the morning of August 28, Katrina reached its peak strength at 1800 UTC, with maximum sustained winds of 175 mph and a minimum central pressure of 902 mbars.

Storm surge from Hurricane Katrina resulted in multiple levee failures in the New Orleans area, flooding approximately 80% of the city, with some places being inundated by more than 15 feet of water. 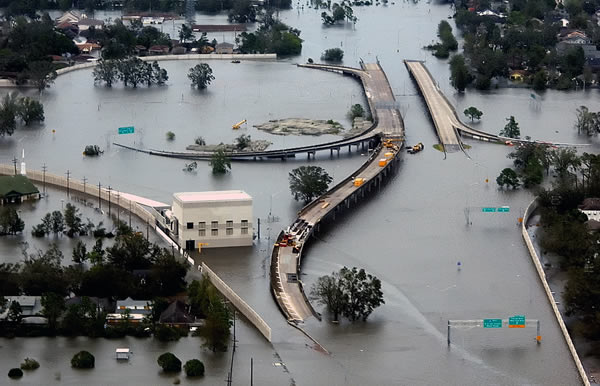 Hurricane Rita was the fourth-most intense Atlantic hurricane ever recorded and the most intense tropical cyclone ever observed in the Gulf of Mexico.

Rita made landfall on September 23 between Sabine Pass, Texas, and Johnsons Bayou, Louisiana, as a Category 3 hurricane on the Saffir-Simpson Hurricane Scale with 120 mph winds.

The storm then pushed through parts of southeast Texas. However, the Louisiana coast bore the brunt of the destruction from the stronger northeast quadrant of the hurricane.

The storm surge caused extensive damage along the Louisiana and extreme southeastern Texas coasts and destroyed some coastal communities.

Several parishes were hard hit, but Cameron Parish was hit the hardest with the towns of Creole, Cameron, Grand Chenier, Johnson's Bayou, and Holly Beach (see photo above right) being totally demolished.

Rita caused as estimated $12 billion in damage along the U.S. Gulf Coast.

Due to the threat of significant storm flooding associated with the landfall of a major hurricane along the Louisiana Coast, widespread evacuations took place in south Louisiana from August 29th through the 31st. Estimates indicate that 1.9 million people evacuated from south Louisiana in advance of Hurricane Gustav.

The storm made landfall near Cocodrie, Louisiana, about 70 miles southwest of New Orleans, on Labor Day morning, September 1, 2008, as a strong Category Two Hurricane with sustained winds of 110 mph. Gustav continued to move inland across south-central Louisiana as a hurricane, then dropping to tropical storm status.

Wind damage was significant in areas from the south-central coast of Louisiana through greater Baton Rouge with this hurricane. Power was knocked out for days, some areas longer, across this region, with numerous trees down and other related wind damage. A peak wind speed of 91 mph was reported at Ryan Field in Baton Rouge, 108 and 117 mph near Houma, Louisiana, and 72 mph at Belle Chasse Naval Air Station.

Storm surge was a significant problem in parts of Mississippi and Louisiana as Gustav moved onshore. At Bay St Louis in Hancock County, Mississippi, water levels were nearly 10 feet above normal.

A total of 34 Louisiana parishes were declared disaster areas as a result of Gustav.

Hurricane Laura came ashore near Cameron, Louisiana, early in the morning of August 27, 2020, as a Category 4 storm.

David roth of the National Weather Service in Camp Springs, MD, has written a detailed account of louisiana hurricanes in the 18th, 19th, 20th and 21st centuries. Read the document (PDF)