Louisiana is a popular setting for the movie industry, and several hit reality TV and cooking shows on the History Channel, Discovery Channel, A&E, Food Network, and other cable networks.

The Bayou State has become an exciting location featuring a diversity of towns and subjects for television for three main reasons: 1) tax credits and incentives, 2) mild year-round weather, and 3) interesting, likable, real-world characters.

Today, the story of alligator hunting in Louisiana is being told on the TV series "Swamp People" on the History Channel. Swamp People debuted in August of 2010, and has become a runaway hit ever since.

The History Channel has announced the premiere of Season 13 of Swamp People for Thursday, January 27, 2022, at 9/8C.

"Choot 'em" is a phrase heard often on Swamp People, voiced by gator hunter Troy Landry of Pierre Part, a small community in the swamp close to the cities of Donaldsonville and Thibodaux, and Lake Verret. To learn more, visit Troy Landry's website at ChootEm.com

Sam and Cody Carroll of Louisiana premiered in December of 2017 their new Food Network show, “Cajun Aces" which entered its 2nd season in the fall of 2018.

Out Da' Bayou on the Discovery Channel

The weekly, 30-minute lifestyle TV show "Out Da’ Bayou" premiered on the Discovery Channel on January 6, 2018.

The locally-produced series centers on Louisiana’s food, outdoor adventure and tourism. Viewers will have the chance to journey into Louisiana marshes, swamps and offshore waters in search of the best food Louisiana has to offer.

John Jackson is the producer, writer, host, and editor of the show. He has produced outdoor and sports-related video for over 26 years.

Read more about Out Da' Bayou

Duck Dynasty on the A&E Network

The Duck Dynasty TV series on the A&E Network featured the Robertsons, a Louisiana bayou family living the American dream as they operate a thriving business while staying true to their family values and lifestyle. Led by Phil Robertson who created the Duck Commander brand, the family and its exploits have become a top-rated show on TV.

The company dates back to the 1970s, and is located in West Monroe, Louisiana.

There’s undiscovered treasure in the bayous of Louisiana and Charles Handler knows how to find it. From a 1957 Chevy Bel Air convertible to a 1967 Shelby Mustang GT, Handler and his team find long-forgotten piles of junk and turn them into dazzling custom cars.

Charles is co-owner of The Bomb Factory in New Orleans. He says his favorite part of the restoration process is not just using his creativity in the design process, but the satisfaction of hunting down the most obscure parts.

Each episode, based in New Orleans, the Big Easy, features amazing vehicle restorations and high stakes auctions where everything is on the line.

The new show airs on the History Channel.

The "Cajun Pawn Stars" series on the History Channel was filmed in Alexandria at the Silver Dollar Pawn & Jewelry Center, and debuted on January 8, 2012.

"Cajun Pawn Stars" featured Alexandria's Silver Dollar Pawn & Jewelry Center, and its owner Jimmie DeRamus and his family-owned business. Jimmie, also known as "Big Daddy", was joined on the show by his daughter Tammie and his younger brother Johnnie.

Map of Reality TV Shows Filmed on Location in Louisiana 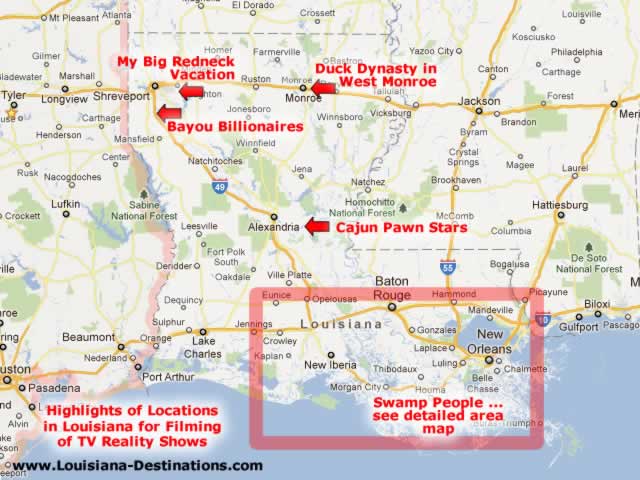